This past weekend, when I made this cocktail, it was hot. Very hot. 90s F and humid. Not my kind of weather. So, when looking for a drink to make, I was looking for something very refreshing that I could use to cool off. When I stumbled upon this one in Jeff Berry's Intoxica!, it seemed to fit the bill. Pineapple-y, banana-y, coconutty, and frozen. Yes please! Berry doesn't give any backstory to this cocktail except to say it is from the 1970s. 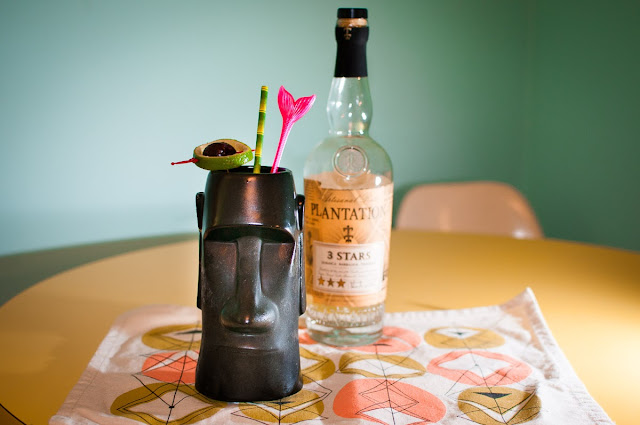 Blend well with one cup of crushed ice. Pour into a small tiki mug. 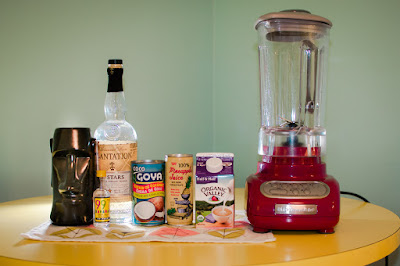 I roughly doubled this recipe because the overall volume is quite low and the tiki mug I wanted to use is pretty large. Doubling it will not knock you on the head with booze since you would turn it into a drink with roughly 2.5 oz. of alcohol in it, which not outside the norm for a modern cocktail. 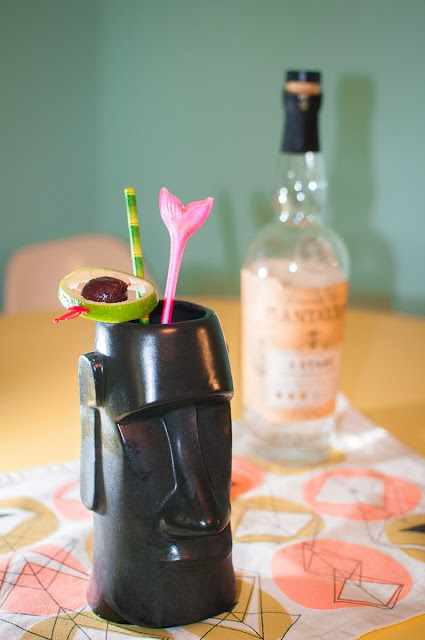 I'd never had 99 Bananas before, but I'd heard of it. Many moons ago, when Jen and I were living in Queens, there was an Irish pub right around the corner from our apartment that quickly became our local. It was largely staffed by a career Irish bartender, who would discreetly sip half-pints of Guinness all night. I never once saw him very drunk, but there were a couple times towards the end of a late night where he would get down a dusty bottle of 99 Bananas from the shelf and would extol the virtues of the stuff to anyone who would listen. I'm not sure if he drank it straight or what, but it seemed to be one of his favorites, apart from Guinness.

I'm also glad it comes in airplane bottles since this is not a spirit I'd be likely to use that frequently. I found the banana flavor dominated this cocktail; there may be other banana liqueurs out there that might work better for you if that would be troublesome in your drink. But honestly, this drink was exactly what I was looking for. A banana slushy with a rum kick. I must say, it was really lovely. 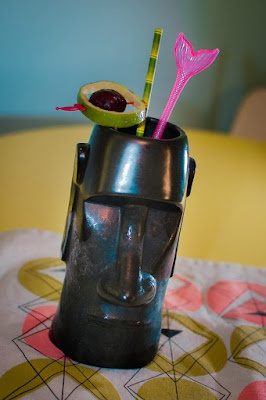 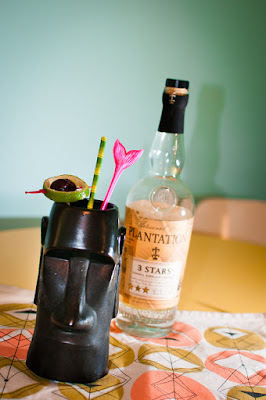 I used my trusty Moai tiki mug I found at a thrift shop in Minnesota a couple years ago, along with a lime peel/homemade maraschino cherry garnish. This one went down easily! My better half even enjoyed it! 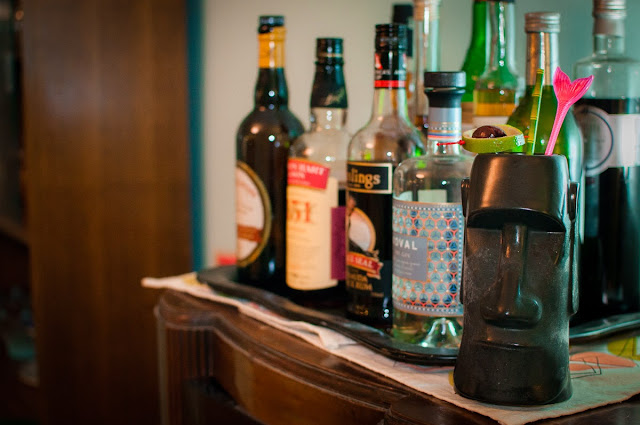 Speaking of whom, I'd like to take a moment to let you know that my wife, Jen LiMarzi, has a new short collection of three very funny essays called "Pop-Ups, Paneling, & Pontiacs: Adventures in 1980s Suburbia (Vol. 2)." It's less than three bucks on Amazon, and I guarantee you will laugh. Show her some support and buy this thing now! Three bucks! Less than a PBR!

So - I'm nearing the end of this little experiment - only four drinks left! Thanks for reading for the last year+ and I'll be back next week with something new. Cheers!

Since we're talking bananas, I'll leave you with this enjoyable little video from 1958 - the McGuire Sisters and Steve Allen, doing their "Banana Split" number. Enjoy!