Happy tiki Tuesday! This week we have the ultra-simple (or so it seems) hurricane.

Jeff Berry credits the hurricane to Pat O'Brien's Restaurant - an Irish-themed restaurant (which is still operating!) - in New Orleans, circa 1960s. This drink has become one of the most common exotic cocktails on menus around the world. I've ordered hurricanes before that neither looked nor tasted anything like this one. I believe this is the only drink in my little journey so far that only uses three ingredients: 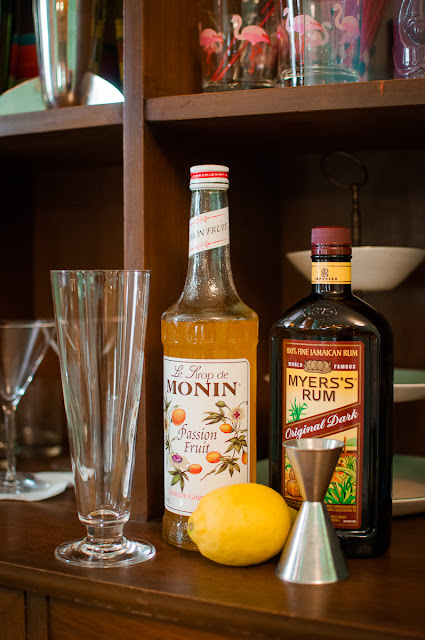 Combine all the ingredients in a cocktail shaker with about 2 cups of crushed ice, shake until the shaker gets frosty, and pour, unstrained into preferably a 15-oz. hurricane glass (which I did not have, so I used a large Pilsner glass), and garnish with a drink umbrella (I "distressed" my umbrella because, well, it's a hurricane!) and a slice of citrus. 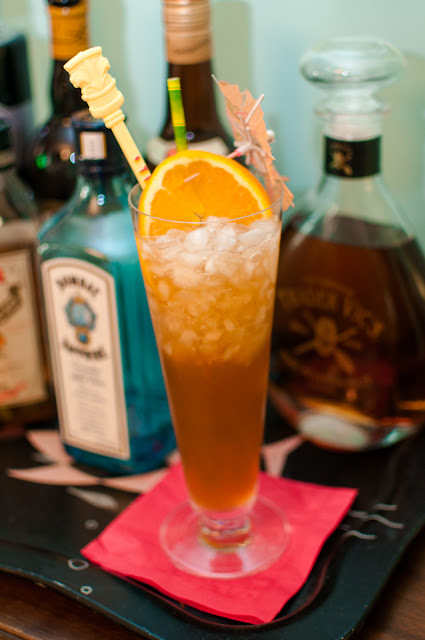 It had to happen some time - this is the first drink in 16 weeks that I really did not like at all. Not sure what happened - I measured carefully, though I bet my lemon could have been a little more fresh. Each sip started with a heavy taste of passion fruit, quickly followed by what I thought was overly sour or too much lemon. The rum was nearly lost between the passion fruit sweet and lemon sour. Each sip inspired a bit of a pucker. I suppose it's a good lesson - the simplest cocktails can sometimes be the most difficult to get right. One must ensure she is using the best, most fresh ingredients, and measure carefully. 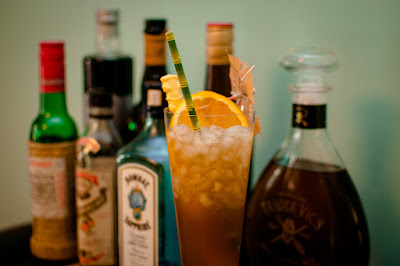 I won't be making (or ordering) another one of these any time soon. So it goes - drink and learn!

Sticking with the hurricane theme, sit back and relax with a little Keely Smith as she sings "Stormy Weather." Cheers!

I don't know why, but I had a hankering to try using a real coconut as my drink vessel this week. So, off to the grocery store I went, and found a Thai (young) coconut (which I read were easier to get into than the brown, hairy kind). I then found a cocktail in Jeff Berry's trusty Intoxica!  that involved serving the drink in either a ceramic coconut mug or an actual coconut and came across the Lei Lani Volcano. Berry doesn't give much of a backstory to this cocktail other than: "From the Polynesian Village Resort, Walt Disney World, Orlando, Florida, circa 1970s."

Now, forgive me, but unlike many folks in the tiki and vintage scene, I just don't have a soft spot for Disney. That being said, this drink is really delicious. Here's the setup: 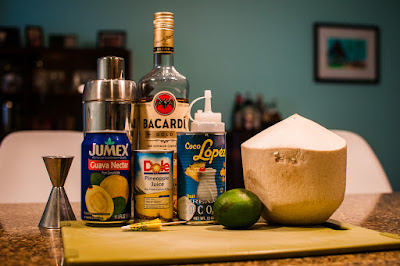 I garnished with a cocktail umbrella, slice of lime, and a flower from our backyard.

* Since I didn't have any coconut rum on hand, instead I used regular old Bacardi Gold, and added a teaspoon of Coco Lopez cream of coconut, as well as about a half ounce of the coconut water that came out of the coconut.

Now that I've used a real coconut, I won't be doing that again any time soon. These things are really hard to get into - unless you have a coco jack tool, which I recently read about in Martin Cate's Smuggler's Cove book. Not keen to purchase another single-purpose tool for the kitchen, I decided to try it myself, using what ended up being an assortment of tools: 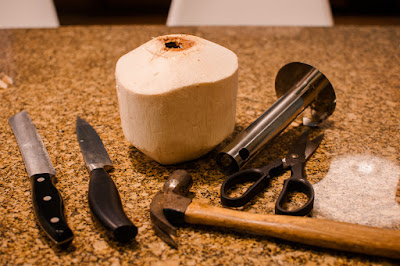 Note: If you decide to try using a real coconut, be extremely careful, and don't try to use knives! Seriously - you could injure yourself badly. Don't be stupid!

It was the hammer that finally did it, showering me with a coconut water spray as I pierced it. I emptied out the water, which was about two cups worth. I wish I could say it was lovely looking and smelled fresh and wonderful, but it was sort of dark and smelled almost overwhelmingly strong. I used a half ounce of the stuff in the cocktail, and I wish I didn't because even though it adds a little coconut flavor, it also leaves behind a slightly unpleasant aftertaste. 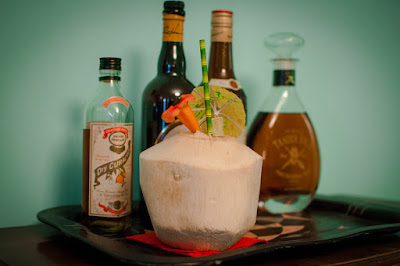 Because I was only able to produce a nickel sized hole (and didn't want to risk a trip to Urgent Care trying to make a larger hole with a different, more dangerous implement of destruction), I had to shove, almost piece by piece, ice into the coconut to make sure the cocktail stayed cold. I also had to use a funnel to get the drink inside the thing! So, no, I do not recommend using a real coconut if you've been thinking about it.

Anyway, aftertaste aside, this is really a pleasant drink. 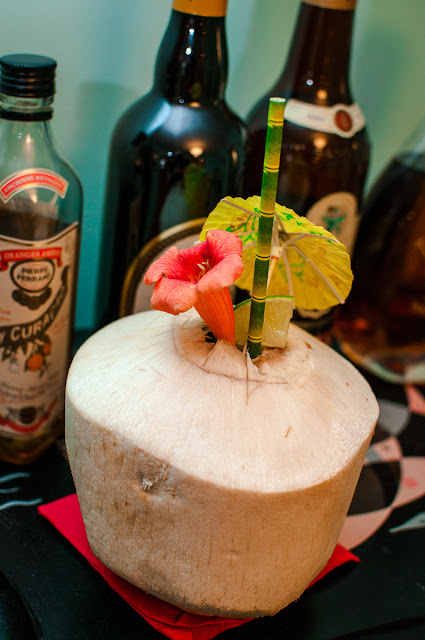 I've never had guava nectar before, and it added a nice note to this drink. I was worried that the relatively large amount of guava and pineapple would overwhelm the rum, and to an extent it is a little on the fruity side, but the rum still does come through nicely. Next time I might dial back the pineapple juice by a quarter or half of an ounce. Like many exotic cocktails, it goes down easy. 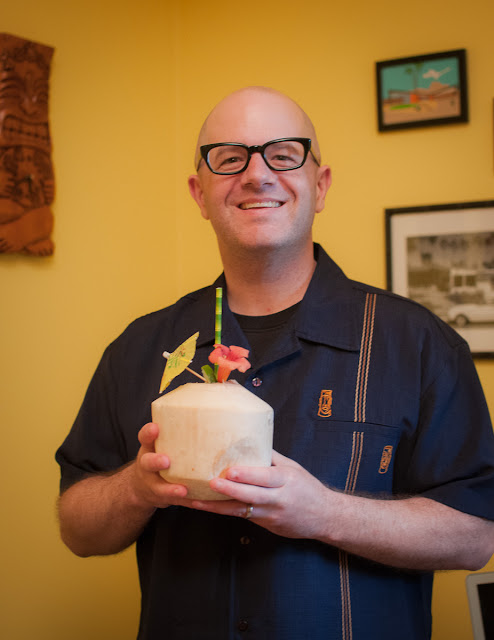 For your listening pleasure this week, I give you exotica legend Arthur Lyman's 1965 Polynesia record in full:

My family is from the Boston, Massachusetts area so even though I grew up in New Jersey, I often visited Boston. My first "tiki palace" experience was when I was about 5 years old at the venerable Kowloon's in Saugus, MA about 15 minutes from Boston, to which I would return often. Built in 1950, it is (or maybe was) something like the 3rd or 4th largest restaurant in terms of seating in the country with about 1,200 seats. The interior is amazing - there are working volcanoes, a fountain surrounded by tables (I think the volcano sat on an island in the fountain). The walls are covered with Polynesian pop art and decor. The food, which is American Chinese and "Thai" is nothing to write home about, I'm sorry to say. But you don't go to a tiki palace for the food - it's an experience. By chance, I was checking out the sale at the Edgewater Antique Mall which is a 10 minute bike ride from my apartment, and found this tiki mug from none other than Kowloon's in Saugus, MA! 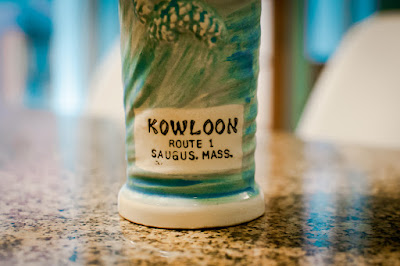 In honor of this find, I tried to find a drink menu from Kowloon's online and try my hand at replicating one of their exotic cocktails. I didn't find anything comprehensive - a page here or there, so I decided to just go completely off book this week and basically create my own drink. This cocktail is based on what I understand to be the New England version of the Headhunter. Jeff Berry has a Headhunter recipe in the Grog Log which he attributes to bartender Manny "Blackie" Andal of the Hawaii Kai restaurant, New York City, 1960s. However, that recipe is much different from the Headhunters I've drank at Chinese restaurants in New England. I did find one recipe of the "New England" Headhunter a while ago online, but details are not great. So I decided to use that as a starting point and create my version of the Headhunter: 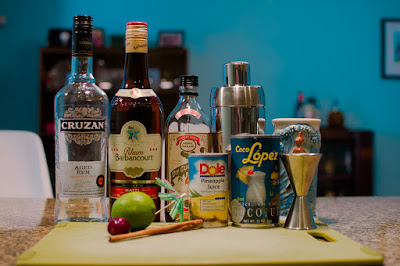 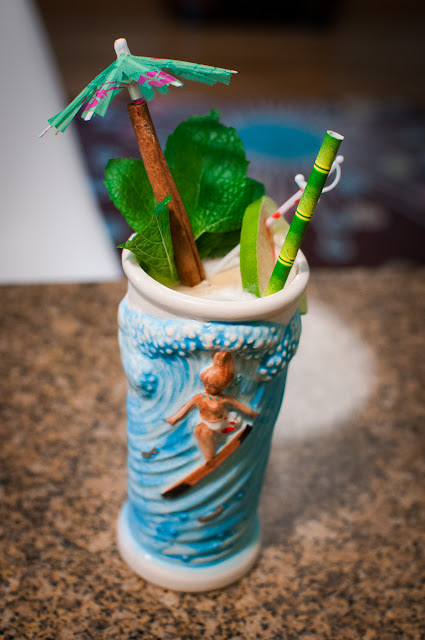 For the garnish, I used a one I learned about recently from a garnish tutorial done by the good folks at Chicago's Lost Lake. I used a green cocktail umbrella and cut parts out of it so that it resembled a palm tree. I then stuck the pick into a piece of a cinnamon stick for the palm tree trunk, and speared that to a piece of pineapple which floated on top of my drink that resembled the beach. I also skewered a lime wheel with a cocktail sword that had fresh cherry juice on it - you can't have a headhunter without some blood! Finally, I added some mint sprigs to the cocktail since our garden is overflowing with mint! It also adds a nice bouquet each time you sip. 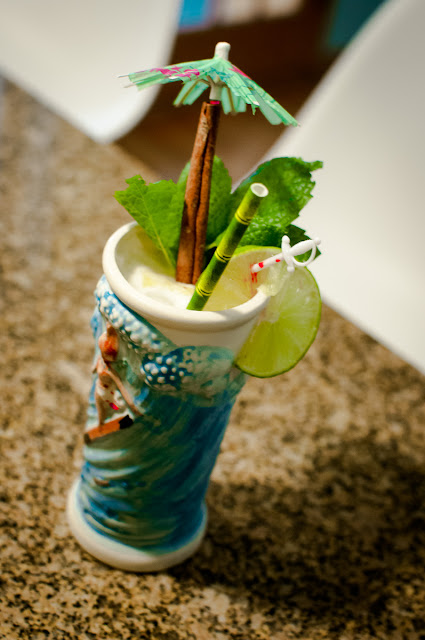 This cocktail goes down easy. The coconut cream, lime, and pineapple juices meld really well together. The Rhum Barbancourt, which is produced from sugar cane juice rather than molasses, makes for a really smooth taste. It really is a delightful rum and this is one of my favorite exotic cocktails. 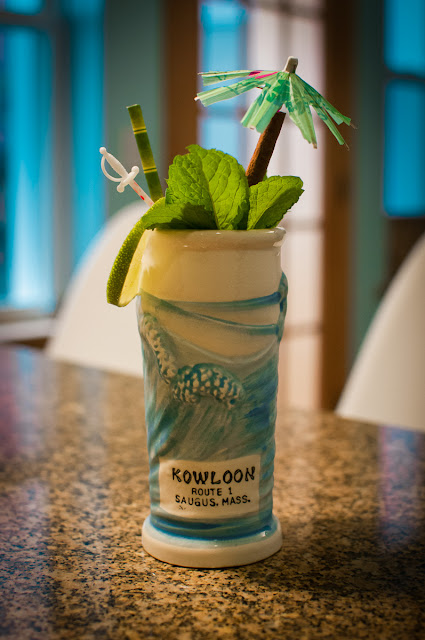 I thought this track would go well with this drink - "Honorable Hong Kong Rock" by the Out-Islanders! Check it out! Cheers!

While visiting Palm Springs, Calif. in March of this year, we were lucky enough to visit the relatively new Tonga Hut location there, where we were treated to a lovely experience in their semi-private "back room" which must be accessed through a "secret" phone booth door.

They got everything right for a tiki bar - the ambiance, music, decor, drinks, menu, etc. were all fabulous. One of my companions' favorite drinks from that night was the "Nutty Chi-Chi" which, it seems, is Tonga Hut's version of the 1960s drink, the Macadamia Nut Chi-Chi, itself a variation of the Don the Beachcomber Chi-Chi. According to Jeff Berry's Intoxica! "chi-chi" is pidgin-English for "breast milk." The addition of the hard-to-find macadamia nut liqueur makes a regular chi-chi a macadamia nut, or nutty, chi-chi. Here's the recipe: 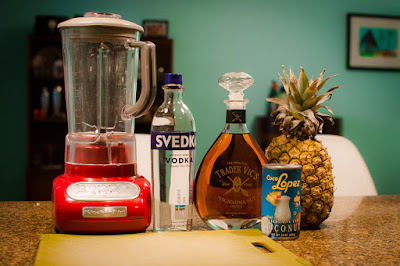 Put everything in a blender and fill blender to the top* with ice. Blend until slushy. Serves two to four. 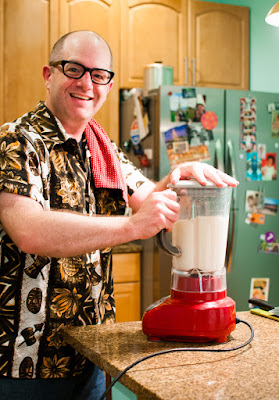 * I used about 3 cups of ice, which did not get near the top of my large blender. Your mileage may vary. 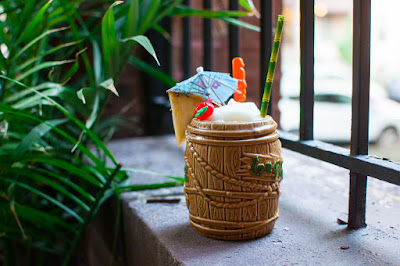 If you've never had macadamia nut liqueur or a drink with it in it, you're in for a treat. It adds a wonderful, nutty (obviously) sweetness to the cocktail but doesn't knock you over the head or overpower the other ingredients, namely the pineapple juice and coconut cream (the vodka is neutral and I barely registered any booze in this cocktail at all, taste-wise). I was a little conservative with the coconut cream, so next time I might add another 1/2 oz. (I halved the recipe). Both my better half and I truly enjoyed this cocktail - another blended slushy drink that fits in well with warm July afternoons. 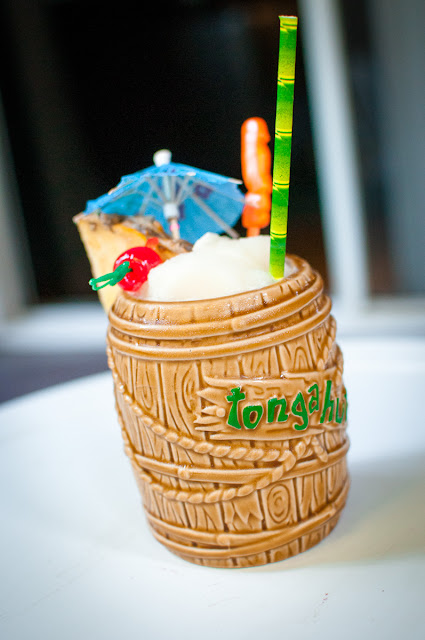 Finding the macadamia nut liqueur can be tough. Here in the Chicagoland area we're blessed with the superstore of booze, Binny's Beverage Depot (32 locations) - they are basically the Walmart of booze and carry really difficult to find products that your corner store would never have. Trader Vic's makes the macadamia nut liqueur that I found, and you may be able to track it down online or a retailer near you by searching here. Unfortunately, depending on where you live, local/state laws may prohibit the shipment of spirits - so good luck.

While you're blending up this delightful drink, what better music to put on than some cha-cha to go with your chi-chi? Here's the wonderful compilation from the Ultra-Lounge series, Vol, 9: Cha-Cha De Amour: