As I mentioned a few posts ago, a few weeks ago we went to the amazing tiki bar in Milwaukee, Foundation. My last drink of the night there, which ended up being my favorite, was their "Martinique." A quick Google search for more on this drink turned up dry, so I can only assume this is a Foundation creation. It is listed on their menu as follows: 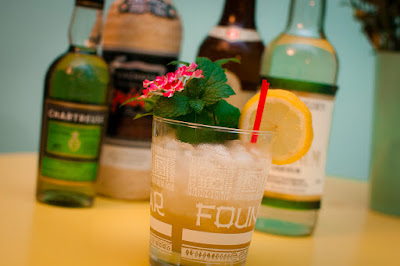 I've been wanting to take a shot at recreating it ever since. Today I got my hands on a small bottle of green Chartreuse (I actually am unsure if Foundation uses green or yellow Chartreuse, so I took a gamble; confirmed via Facebook that they use green) and thought I would try mixing one up. Now, I do not have any rhum agricole, which is a rum specific to the island of Martinique (hence the name of the drink). Rhum agricole is produced on Martinique and is made from pure sugar cane juice. I do have a bottle of Rhum Barbancourt, a Haitian rum (perhaps I should call the version that follows the Port-au-Prince?) which is also made from pure sugar cane juice, but due to differences in production methods, terroir, etc. it apparently has a different flavor. I also have a bottle of cachaca, a spirit produced in Brazil, very similar to rum, and also distilled from pure sugar cane juice. If you're interested in more details on the differences of agricole, Barbancourt, and cachaca, head on over here for a full report. (The difference that all of these three spirits have compared to other rum, is that other rums are produced from fermented molasses rather than sugar cane juice.) 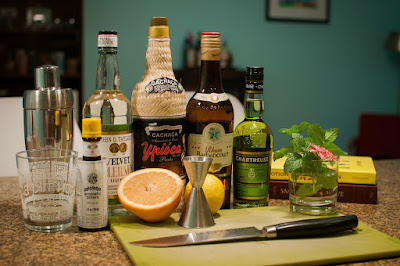 Absent the "correct" rum, I decided to combine cachaca and the Rhum Barbancourt. And since I have no anise liqueur, I'm going with a dash of Angostura bitters instead.

My version of Foundation's Martinique cocktail:

Combine all the ingredients in a cocktail shaker filled with crushed ice and shake with vigor. Pour unstrained into a double old fashioned glass (I used the one I bought at Foundation, of course!), and garnish with plenty of mint and flowers if you have them. 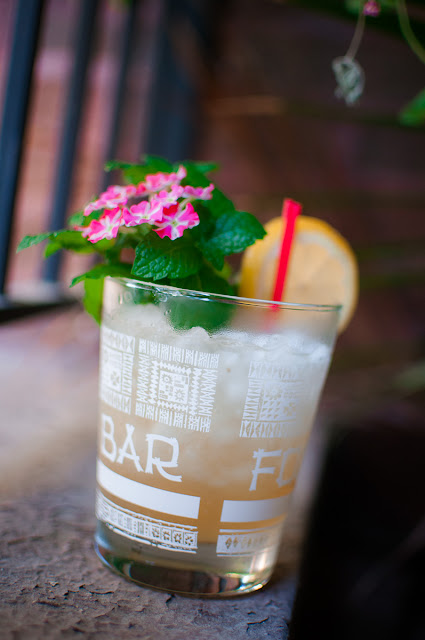 The result was lovely, and damn close to how I remember the Foundation version of this cocktail. Chartreuse is produced by monks in France using over 130 herbs, plants, and flowers and it's on the verge of dominating the drink a bit in the quantity I used above. *If I made this again, I would knock it down to 0.25 or 0.50 oz. Chartreuse and use an extra quarter-ounce of the Barbancourt instead. I might also try a version omitting the bitters. This cocktail is spicy and dry, with a hint of sourness, and creates an incredible sensation on your tongue with each sip. I can't recommend it enough! Chartreuse is expensive (about $30 for a 375 ml bottle) but a little goes a long way, so it will last a while. This is a pretty easy drink to make if you have the ingredients, and would be a great drink to add to your tiki cocktail party! 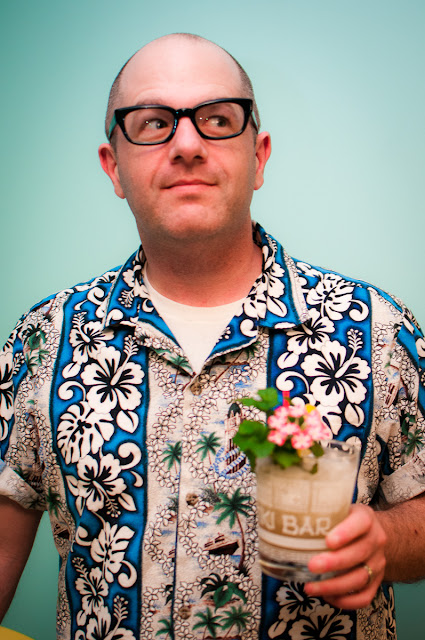 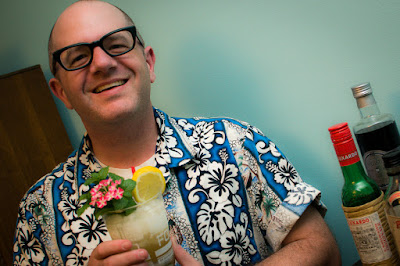 In honor of the cachaca used in this cocktail, which hails from Brazil, here's a great compilation of vintage Brazilian samba/bossa nova and other music. Get shaking (hips and shakers) - cheers!

This week's cocktail was a fun (and delicious) one. 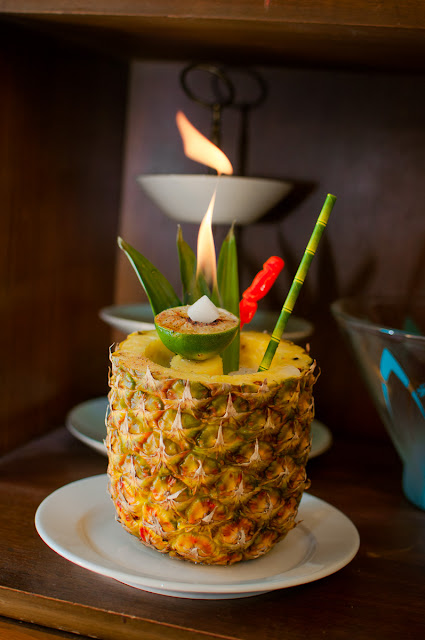 I've been wanting to try a flaming cocktail for a few weeks and this week's Voodoo Grog seemed like the perfect opportunity. I found it by looking up cocktails in Jeff Berry's Potions of the Caribbean that use allspice or pimento dram (which I made myself recently and have been wanting to use more often). Following last week's Suffering Bastard, which I found to be a wonderfully spicy and dry cocktail, I was looking for a drink that might have a similar profile and figured that almost anything that used allspice dram would be a good candidate. I wasn't disappointed.

According to Berry, the Voodoo Grog was invented by Trader Vic in the mid-1950s. Berry slightly adapted a version he found in Trader Vic's 1972 Bartender's Guide as such: 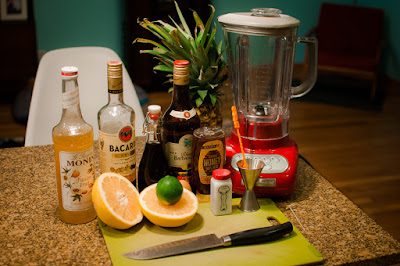 Dissolve the honey in the lime juice. Place this mixture, and all other ingredients -- except nutmeg -- into a blender. Blend for 20 seconds. Pour un-strained into a Voodoo tumbler, large snifter, or, as I did, into a hollowed out pineapple with the core still intact. Dust with freshly grated nutmeg. Garnish with a mint sprig and pineapple stick (I used three pineapple leaves and a swizzle stick). 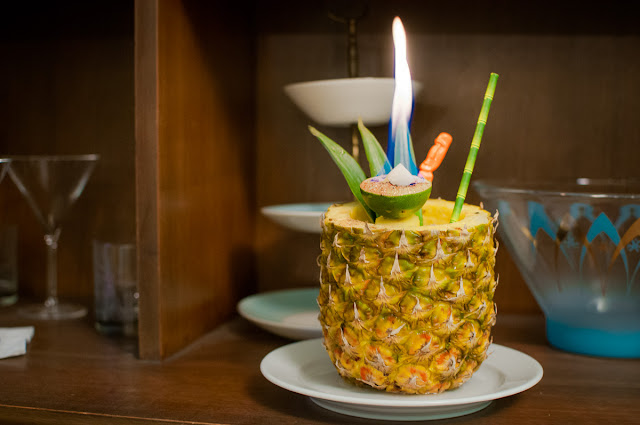 I'd heard that nutmeg can sometimes be used on flaming drinks to create sparks with the flame, so figured I would try a small flame with this cocktail. I kept the core of the pineapple intact after using my handy tool to hollow the rest of it out. I then used a plain toothpick to attach a spent half of a lime to the pineapple core. I soaked a sugar cube in lemon extract (which has a higher proof than 151 rum, and thus provides a better flame) and lit the sucker on fire! My first attempt was slightly less flame than expected, so I used more lemon extract - probably about a tablespoon - and tried again, with excellent effect! 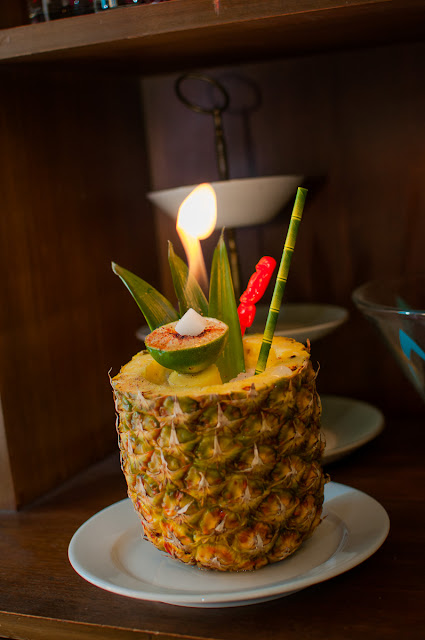 ***Please note: Always use extreme caution when creating flaming drinks! Always be sober when using flames, warn any guests, be sure you have a fire extinguisher handy, and be sure to extinguish the flames safely before drinking the cocktail. *** To my delight, not only was this cocktail fun to make and look at, but it was also delicious. The egg white gave it a beautiful, light froth, and the combination of the sweet passion fruit and honey with the spicy allspice dram and nutmeg made for a surprisingly fantastic meld of flavors. The passion fruit did not overwhelm the drink at all - just be careful to not use too much. The two types of rum almost took a backseat - the drink tasted like it barely had any alcohol in it at all.

In honor of the name of this week's cocktail, I give you "Voodoo Dreams" by Les Baxter. Cheers!

As my core readers (all 10 of you!) will know by now, this blog and its drinks are heavily influenced by the books and classic recipes relayed by Jeff "Beachbum" Berry and Martin Cate, authors of the Grog Log (JB), Potions of the Caribbean (JB), and Smugger's Cove (MC). The recipe for this week's drink, the Suffering Bastard, appears in all three books above, and each time it's a little different. It wasn't until today, after I had gone shopping, that I absorbed Jeff Berry's recipe in Potions that I realized a) it is the definitive version of the recipe and b) I bought some of the wrong stuff.

In Potions Berry has published the recipe from the private papers of globetrotting bartender extraordinaire, Joe Scialom, most famously of the Shepherd's Long Bar, Shepherd's Hotel, Cairo, 1940s (which makes an appearance in one of my favorite films, the English Patient). Apparently devised as a hangover cure for the 11th Hussars - British troops stationed in Egypt during the Second World War, there are many versions of this drink floating around, and Berry himself published a different version in his Grog Log. What seems to be the definitive version, from Potions:

My version, cobbled together from the three above books: 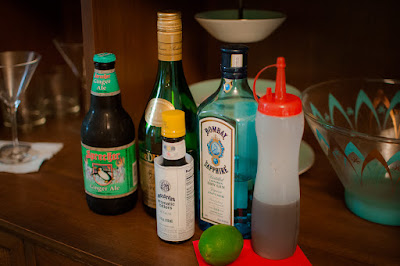 Same method as above. I garnished with an orange wheel, three pineapple leaves, speared with a home made maraschino cherry. My one misstep that keeps my version from being the same as Cate's in Smugger's is I used ginger ale instead of ginger beer. So it goes. Nevertheless, the result was fabulous. 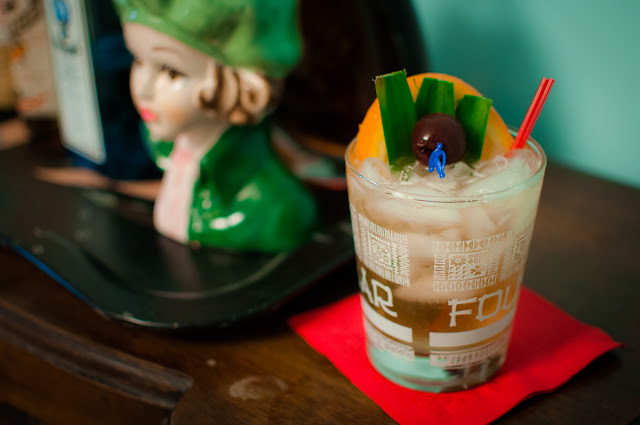 Refreshing, yet with a small kick from the brandy, this cocktail goes down easily. The bitters and the nose from my homemade maraschino cherry lend a hint of spiciness to the cocktail which is amplified by the ginger. 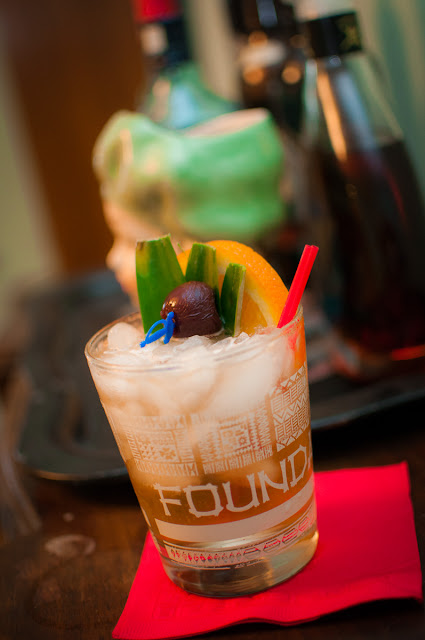 Surely, had I used ginger beer, the result would have been even better. This is without a doubt one of my favorites out of 21 cocktails I've made over the last 21 weeks. Perhaps it's because fall is just on the horizon, but I find myself being drawn more towards this type of tiki drink lately - more dry, more spicy, less sweet. At Foundation in Milwaukee - easily one of the best tiki bars I've ever been to - I had their "Martinique" cocktail - rhum agricole, lemon, grapefruit juice, falernum, Chartreuse, and anise - and it was my favorite drink of the night. I need to cobble together some dough to buy a bottle of Chartreuse to try to recreate it. Anyway - the Martinique's flavor profile was more on the spicy, dry side, than sweet. And it was wonderful! 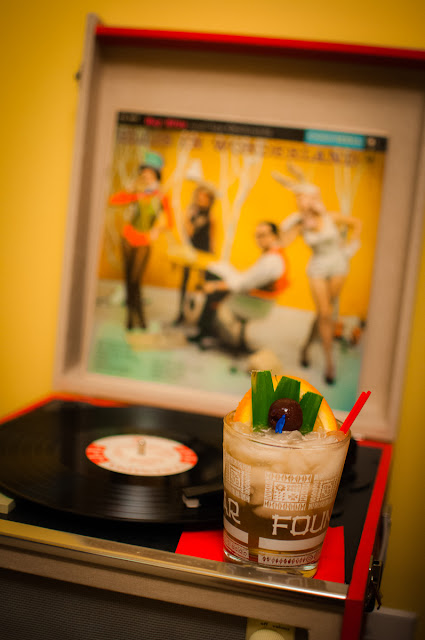 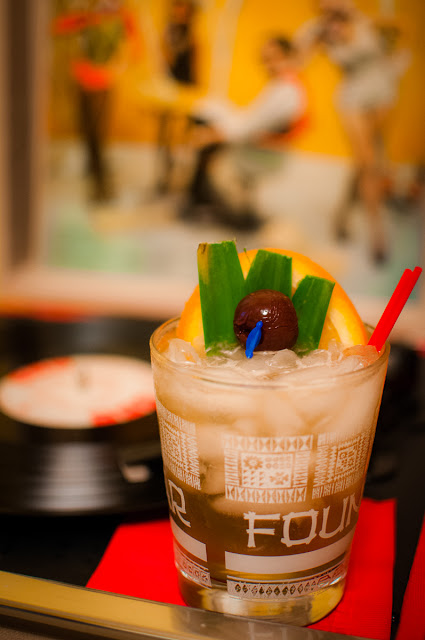 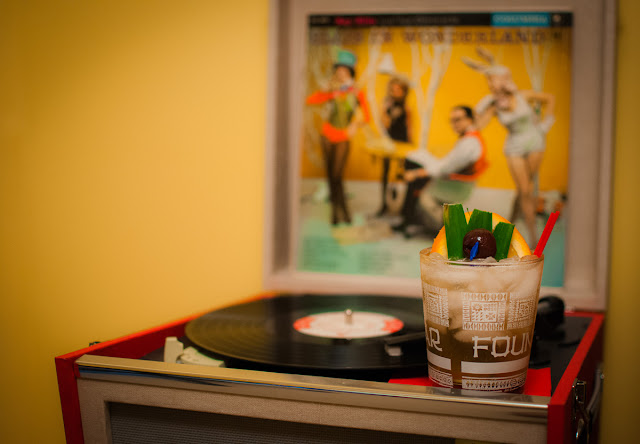 As I mixed up this drink, I put on an LP I recently bought used at Vintage Vinyl in Evanston, IL - Ellis In Wonderland by Ray Ellis and his Orchestra. I admit without embarrassment that I bought this solely on the merit of it's cover. As it turned out, it's a really pleasant 1950s instrumental - some would derisively call it "elevator music" - but I love it. You can check it out, of course, on YouTube:


Cheers and thanks for reading!
Posted by Eric Hauser at 18:49 No comments: