This week we have another non-alcoholic drink that echoes many flavors of a true fully loaded exotic cocktail. 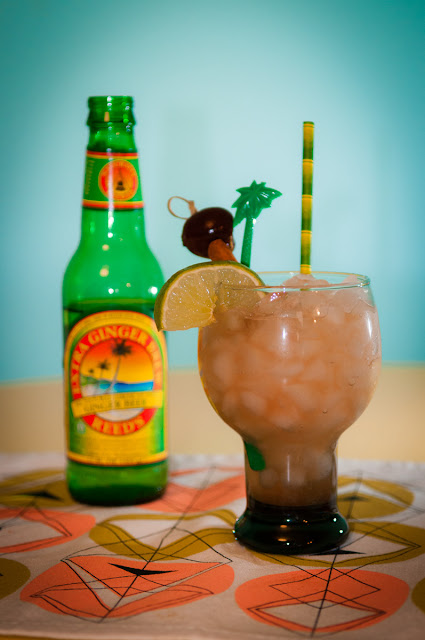 After last week's complete and utter failure, I decided that I would mostly go it alone for the rest of the month and try to come up with a few recipes of my own that had a little more nuance, and were more interesting than just a glass full of juice, seltzer, and grenadine.

After considering a few of the non-alcoholic ingredients in some of my favorite drinks that usually complement rum, I rounded up a few that seemed like they could stand on their own, no rum needed. The Northsider Dry Ginger Spritz was born: 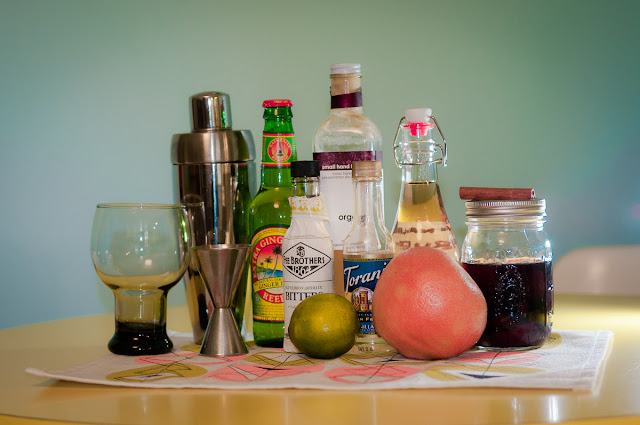 Add all ingredients -- except ginger beer -- to a cocktail shaker with about a cup of crushed ice. Shake vigorously. Add a half-cup or cup of crushed ice to the vessel of your choice - a double old fashioned glass would have worked here too - and open pour the contents of the shaker into the glass. Top with the ginger beer and give a quick swizzle to combine. I garnished with a cinnamon stick, maraschino cherry, and lime wheel.

* To make cinnamon syrup, boil 1 cup of water with 2 halved cinnamon sticks over high heat in a saucepan. Add 2 cups granulated sugar and stir until dissolved, about 1 minute. Immediately remove from heat. Cover and let sit at room temp for 12-24 hours. Strain through a cheesecloth and/or fine mesh strainer into a bowl and then use a funnel to bottle it. It'll keep refrigerated for a few weeks.

** If I had more time, I would have made my own vanilla syrup using a whole vanilla bean, using a similar method to cinnamon syrup, but instead I used good old Torani sugar-free vanilla syrup. Does the job. 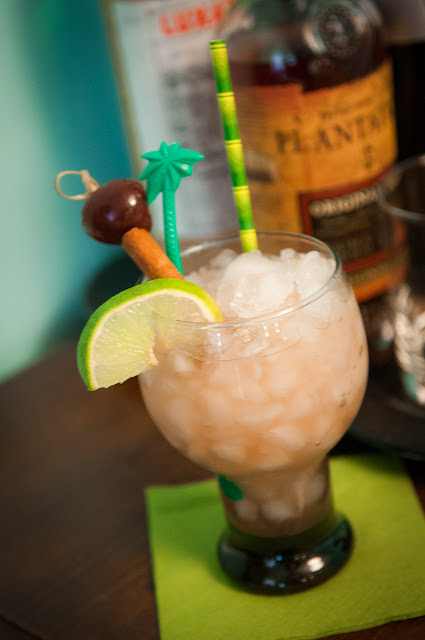 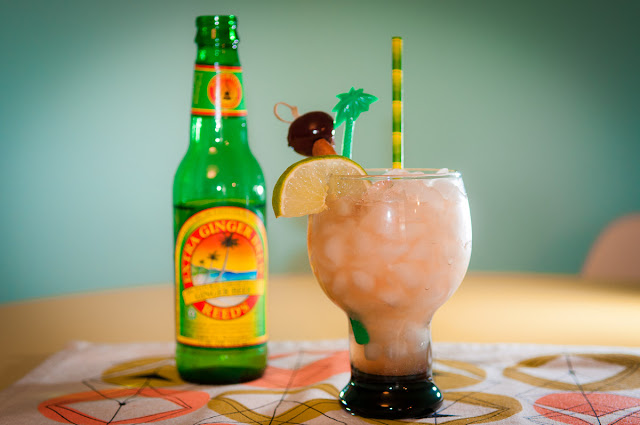 Verdict: I loved this drink! This is definitely one of my favorite drinks of the past 34, alcohol or not. Normally I don't care for ginger beer on its own, but with the cinnamon spice and the grapefruit/lime citrus, it really mellowed out what I find to be a fairly potent and harsh ginger flavor of the ginger beer, and added a few more levels to the drink. There was nothing syrupy sweet or too tart about this cocktail, unlike a lot of other alcohol-free tiki drinks out there. This is also incredibly easy to create in a batch - just multiply the ingredients above (except for ginger beer) by the number of drinks and get ready to go in a large cocktail shaker. When you're ready to serve, add ice, shake up, pour, and add ginger beer. Your teetotaler guest will love this one and they won't miss the booze. 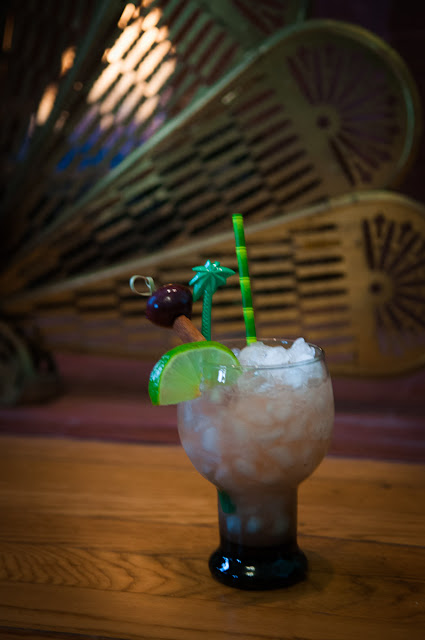 Speaking of teetotalers, here's an interesting clip about temperance warrior, Carry Nation, known for smashing up saloons with various implements of destruction (most infamously, a hatchet) in the early years of the last century. And let us be thankful that we can now choose temperance for ourselves, and not at the behest of a religious nut or the government!

A terrible name for what is probably a great idea.

After all the excesses of the holiday season, I decided to start 2017 off right and not drink alcohol for the month of January, following the example of John Ore (subject of article linked above) who has been doing Drynuary for 10 Januaries.

But what about the blog? The tiki drink project? Well, doing this little reset was more important. Plus, it gives me a chance to explore the niche of non-alcoholic tiki drinks. Oh yes, they exist. And let's be thankful they do, because if you're throwing a tiki-themed party, it's always a great idea to have drinks available for either drivers or teetotalers alike that are just as attractive and taste just as great as the drinks with some ammunition in them. 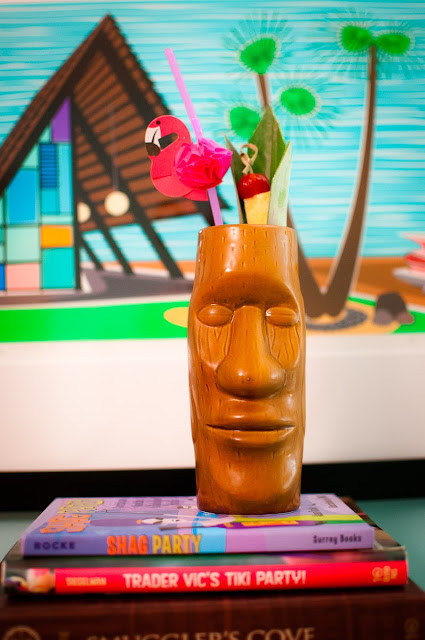 Jeff Berry has a couple non-alcoholic drinks in the Grog Log and so does the Trader Vic's Tiki Party book, which is also a great source for Hawaiian/tiki-themed party food recipes.

Unfortunately the drink I chose sucks. 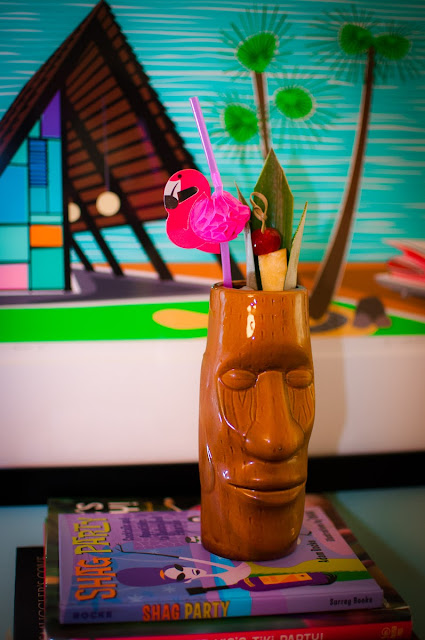 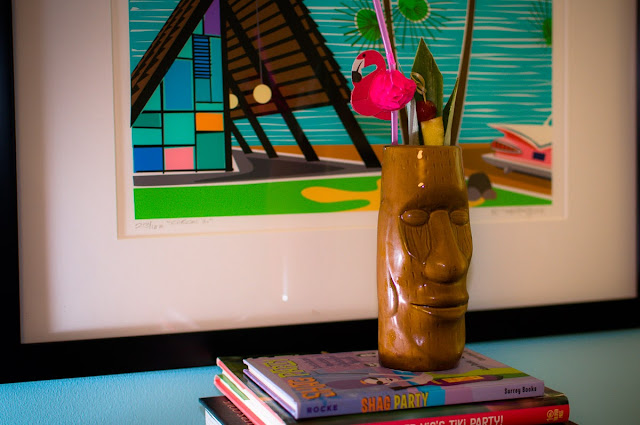 The Queen Charlotte Fruit Punch is a mix of fruit juice, passion fruit syrup, and grenadine. It was cloyingly sweet at first and then turned extremely tart. There really is nothing redeeming about this one, even though Trader Vic himself apparently came up with it in the '70s. Little kids or juice-box addicted adults might like it and get a kick out of it. But I'd advise skipping this one. 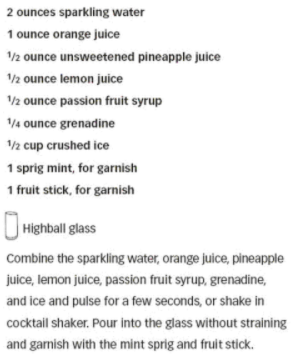 I'm currently letting some Smuggler's Cove Cinnamon Syrup steep and I have some ideas for my own non-alcoholic tiki drinks that don't involve so much juice. Stay tuned for the next one!

Artwork on the wall by Nat Reed.
Posted by Eric Hauser at 20:19 No comments: