Happy Halloween! This post represents the half-way mark for this little blog adventure and I've learned a lot about the history and crafting of many great exotic cocktails - but still have a lot to learn!

Being Halloween, I had a little fun with this week's post. I tried to find a "spooky"-ish tiki drink to make and the closest I could get with ingredients on hand was the Sidewinder's Fang via Jeff Berry's Grog Log. Berry notes that this drink originated from the Lanai Restaurant in San Mateo, CA in the 1960s. 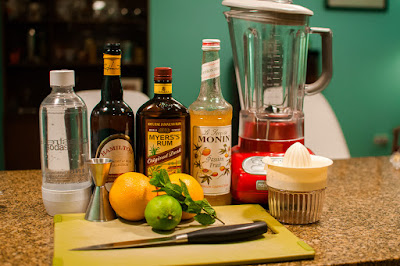 Blend with 1/2 cup crushed ice for 10 seconds. Pour into a large snifter filled with ice cubes. Garnish with length of spiral-cut orange peel and mint sprig. 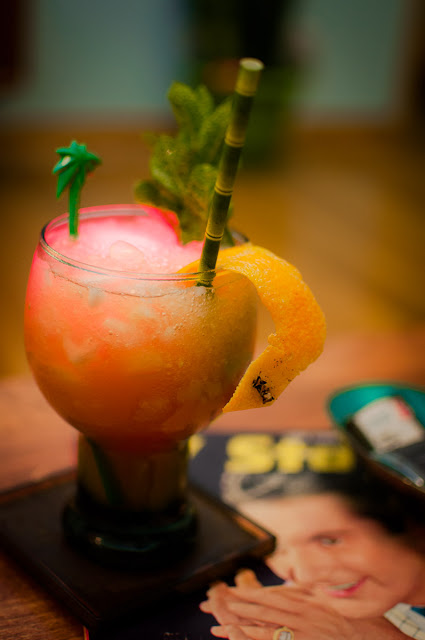 In Smugger's Cove Martin Cate shows you how to make an orange peel that resembles a snake head (to match the name of the drink). I gave it a shot, but I could use some practice! And being Halloween, I figured it was good a time as any to use my glowing ice cube. Also, I don't have a large snifter so used a tulip glass. 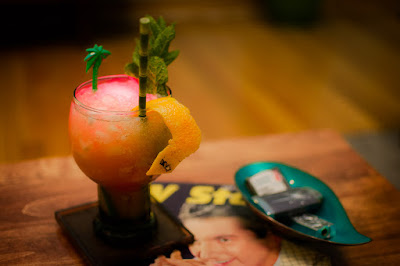 I also decided at the last minute to throw together this Liberace costume (hair and styling courtesy Jen LiMarzi!)! Liberace ... tiki cocktails ... a match made in heaven! 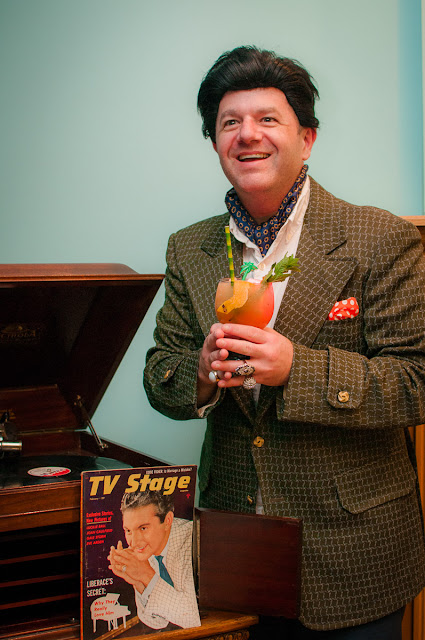 This was a fun and easy one to make, but nothing to write home about. I think I need to steer clear of drinks with passion fruit syrup or try a different brand of syrup because each time I use it I find it overpowering. It's not completely unpleasant though - the usual blend of strong, sour, and sweet. 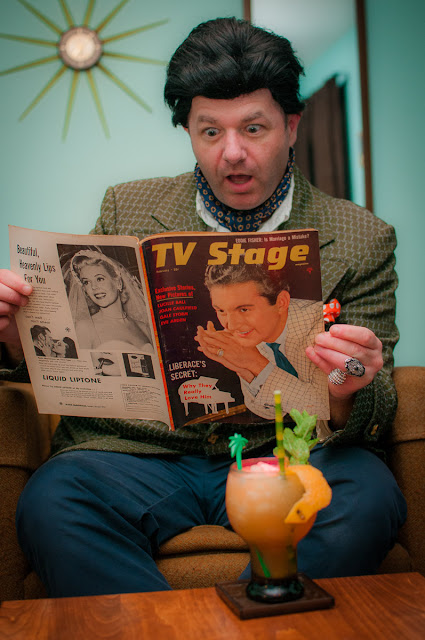 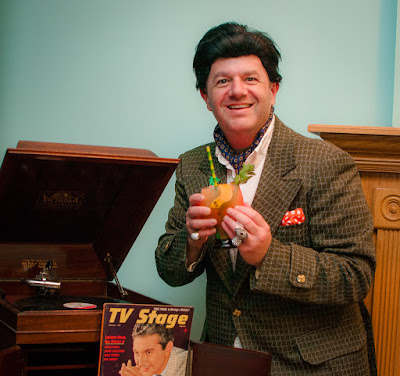 And now for a bit of the real Liberace - he's amazing! Happy Halloween and Cheers!

After a couple of weekends being away - part in London, part in New York - I'm ready to pick up where I left off.

While we were away, summer slipped firmly into fall. Back here in Chicago, many trees are changing colors, there's a little nip in the air, and the days are shorter. Put all that together and I am in the mood for a cocktail that tastes like fall! I briefly looked at my usual sources - Smuggler's Cove and Jeff Berry's books - for cocktails that utilized some of the more spicy/fall-like ingredients like allspice dram, ginger, calvados, etc. But I came up short. So, I decided to go out on my own and try to create my own drink, with mixed results.

I looked in my liquor cabinet and refrigerator and pulled out anything that seemed to say "fall" to me - apples, cinnamon, cider, Demerara rum, allspice dram, etc. Here's what I came up with. I give you the Apple Spicehauser: 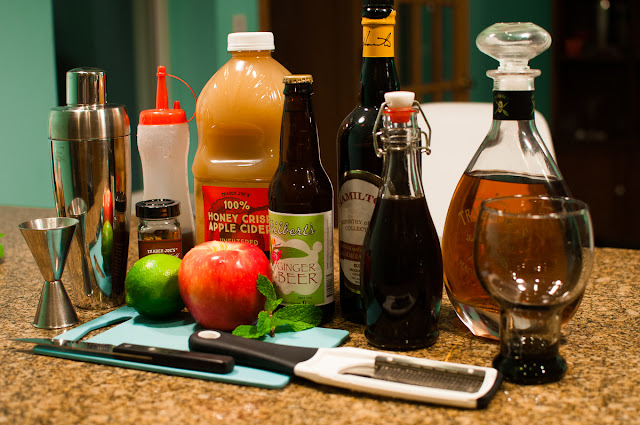 Combine all ingredients -- except ginger beer and cinnamon -- into a cocktail shaker and fill halfway with ice. Shake vigorously. Strain into the vessel of your choice that already has large ice cubes in it, and then add ginger beer. Stir with a bar spoon. Use a fine grater to grate a bit of cinnamon stick over the drink. Garnish with apple wheel, mum, mint, and a drink umbrella stuck into the cinnamon stick (resembling a palm tree). 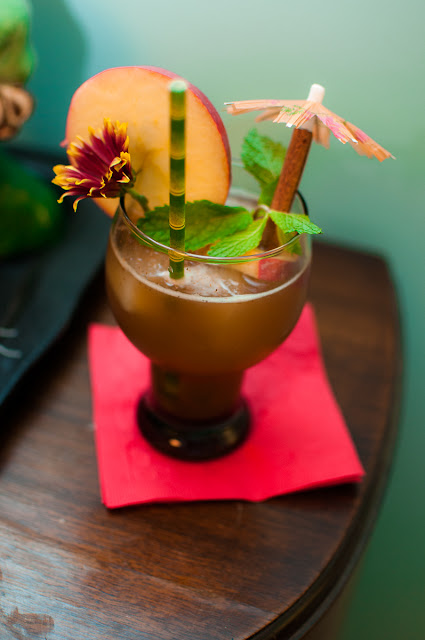 This is a really pleasant drink, with a definitely fall/spicy feel to it. However, if I were to make this again, I would make some adjustments. First, I would not use the macademia nut liqueur. It gave the drink a slightly weird aftertaste. I'd probably leave out the 151 and instead use about an ounce more of both ginger beer and cider to give this an even more spicy/fall like feel. I'd also try using cinnamon simple syrup if I'd had the forethought to make it a day earlier. 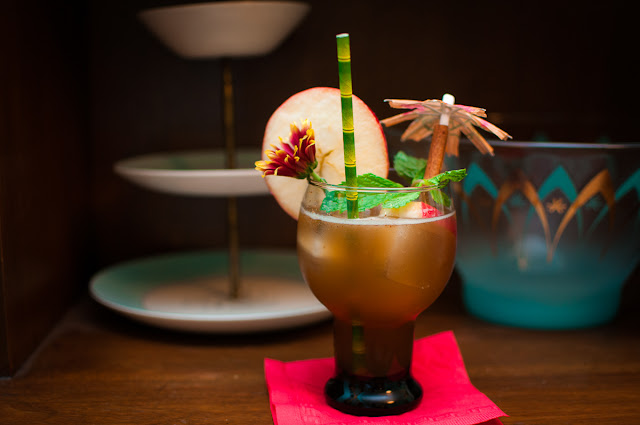 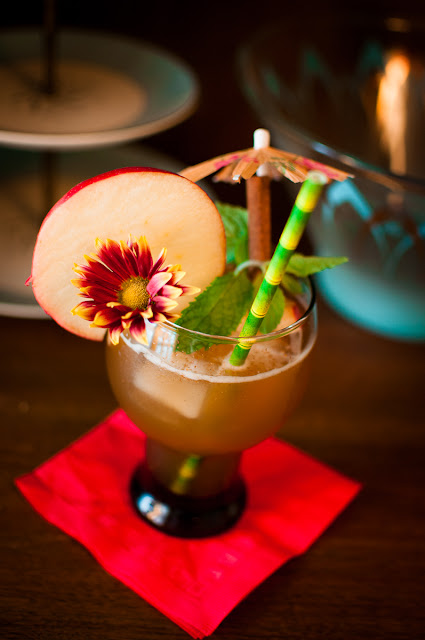 I realize that making a "fall tiki cocktail" is a little bit of a folly given that there is no "fall" in the tropics, but wanted to give it a shot. Next week we get back to exploring some classics. Thanks for reading.

Since Halloween's right around the corner, I'll leave you with the 1910 version of "Frankenstein" - what I understand to be the first filmed version of the classic story. It's 12 minutes long, it's silent, and scarier than you might think. Cheers!

After how much I liked my version of Milwaukee Tiki Bar Foundation's "Martinique" cocktail, which features Chartreuse, I decided to keep going with Chartreuse and found the Chartreuse Swizzle in Martin Cate's Smuggler's Cove book, where the main ingredient is ... you guessed it -- Chartreuse. 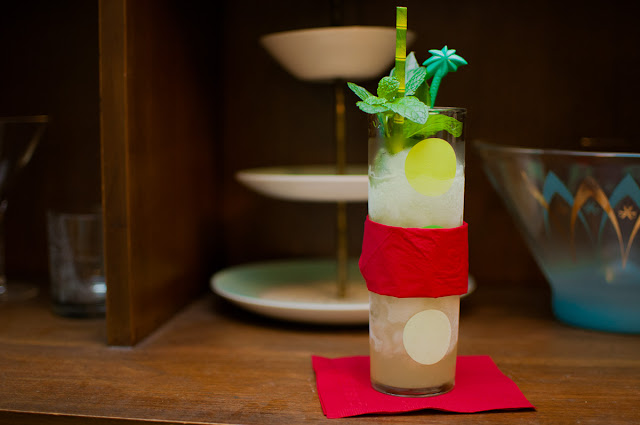 The Chartreuse Swizzle is a modern exotic cocktail creation by Smugger's Cove bartender, Marcovaldo Dionysos. The interesting thing about this drink is that green Chartreuse is the main spirit, which seems to be pretty rare.

This is an easy one: 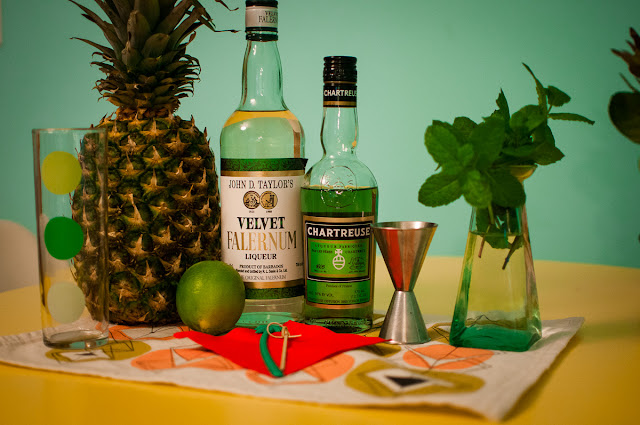 Combine all the ingredients in a Collins or Zombie glass. Fill the glass with crushed ice until it's 3/4 full. Swizzle with a lele or barspoon for 30-60 seconds until the glass gets frosty. Top up with additional crushed ice as needed to fill glass. Add garnish. I garnished with a sprig of mint, a pineapple leaf, and a swizzle napkin wrap. 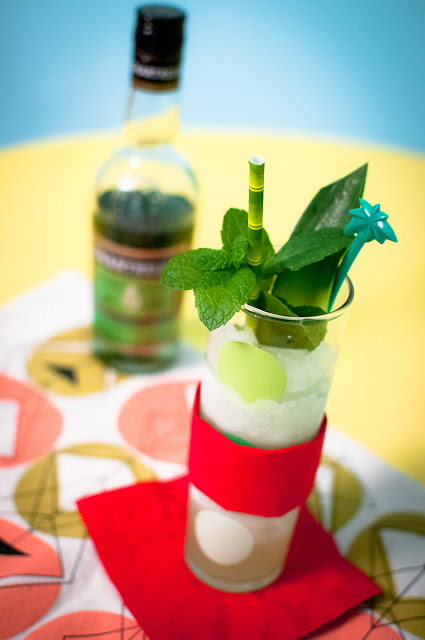 Martin Cate explains the swizzle napkin wrap, which he learned at Trader Vic's. Basically, take a cocktail napkin and open it up. Fold diagonally creating a right triangle. Fold or roll the wide edge a few times and tie the two ends together around your glass. It gives the drinker something to hold onto so they don't have to hold a very cold, frosty glass. 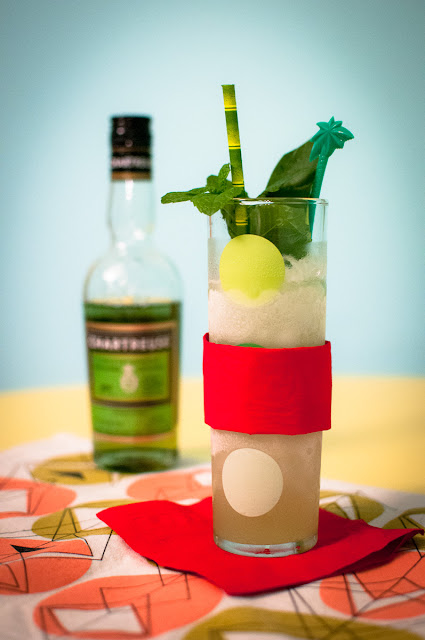 Given my new-found appreciation for Chartreuse, I really like this one. Even though it's a frosty swizzle which typically would conjure images of a drink to be enjoyed on a hot summer day, this cocktail seemed perfect for early fall - a little spicy, a bit floral, with the sweetness of the pineapple juice taking the edge off of the Chartreuse. My better half called it "medicinal" but not pejoratively - she actually quite liked it.

This is a lovely, easy cocktail to make - definitely worth trying.

While you're swizzling up this modern cocktail, stream some modern exotica - one of my favorites - the Martini Kings!