Ice can be just as an important part of a tiki drink's garnish as a lime wheel or pineapple leaf. Back in the day, Don the Beachcomber had a lot of fun with different ice garnishes. The Navy Grog and Captain's Grog ice cones are great examples. Another fun trick that Don did with ice, was the ice shell. This is a garnish where you mold ice inside the cocktail coupe, in such a way that a layer of finely crushed ice coats the inside the the glass as well as rises above the edge of one half of the glass, forming a "hood." I noticed this cocktail, Beachcomber's Gold, in Jeff Berry's Grog Log recently and thought I would give it a try (the Colonial Grog in Berry's Potions of the Caribbean also employs an ice shell - my fellow tikiphile and pal The Meek Tiki made this one a little while ago, ice shell and all). 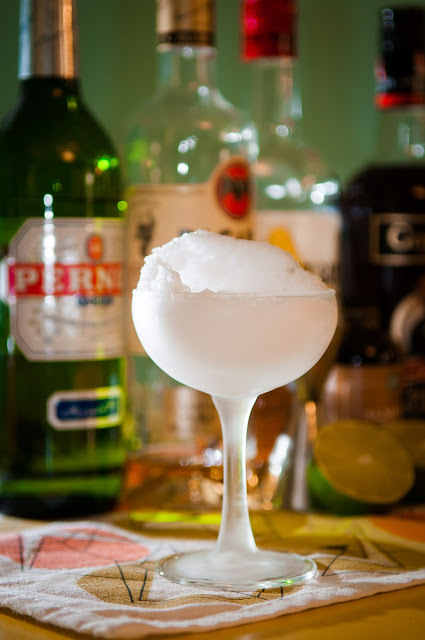 Using a large blender, I created "snow ice" - very finely blended ice - and then used the handle of a wooden spoon to help mold the snow ice inside a cocktail coupe that had been sitting in the freezer. It was a little tricky to get the "hood" to form, but with enough pressure you can basically force the ice over the edge and with any luck it will stay in place. Once I got a good ice shell in place, I quickly placed the glass back into the freezer to firm it up. Mine ended up staying in the freezer for a couple days, which worked well. 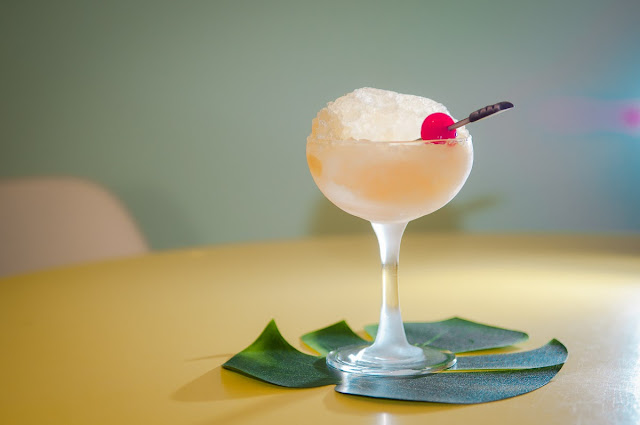 As for the drink itself, there seem to be quite a few versions of this one floating around. In the end, I actually went with a recipe I found on the wonderful site, Atomic Grog, which purports to be the "ancestor recipe" of a drink called Liquid Gold. It differs significantly from the version printed in Jeff Berry's Grog Log. Apparently Berry himself was perplexed by the many versions of the Beachcomber's Gold, as the Atomic Grog notes that Berry "devotes five pages in his 2010 book, Remixed, to this dilemma and explores three different recipes." Since Remixed is a more recent printing than my Grog Log I decided to go with the Atomic Grog's version of the cocktail. It is as follows: 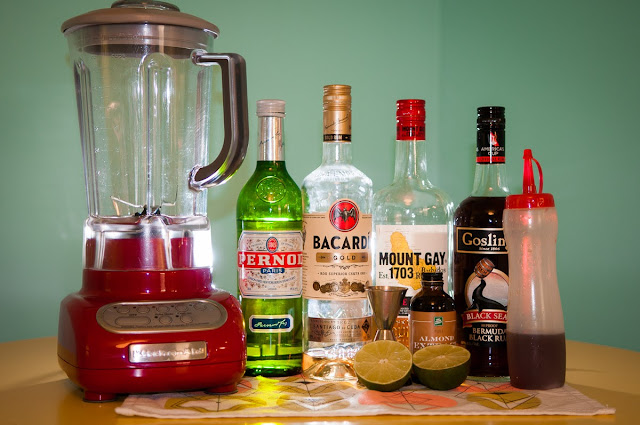 Blend with around 1/4 cup of crushed ice and strain into a champagne saucer or cocktail glass lined with an ice shell. 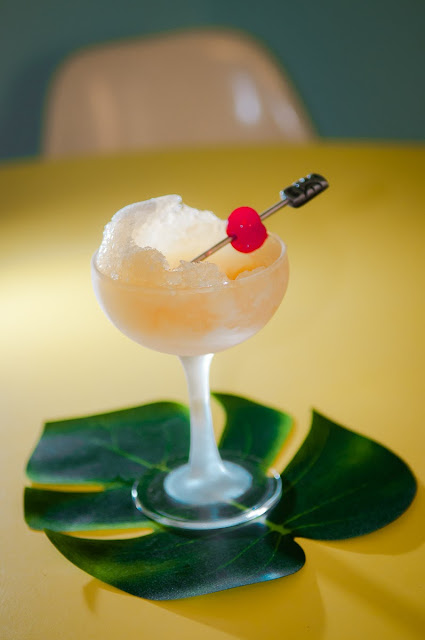 As the Atomic Grog goes on to note, "This is the 'Hollywood and Palm Springs' version of the Beachcomber’s Gold, which Berry traced back to 1937." The Grog Log's version is much different, employing French and Italian vermouth, as well as bitters along with rum, and Pernod. It also omits lime juice and simple syrup, and uses only one kind of rum. 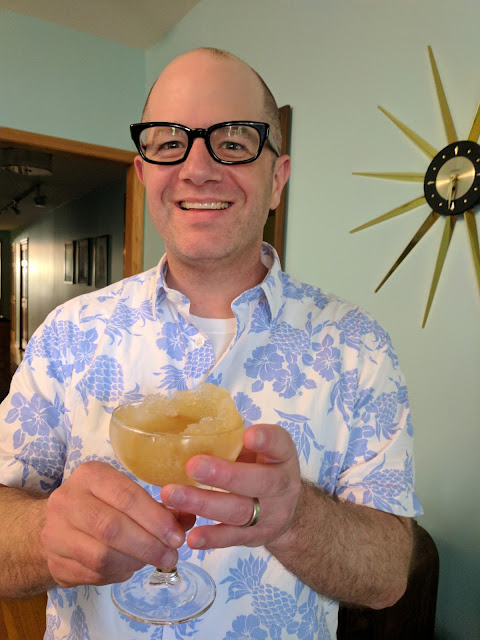 Even though there are only six drops of Pernod in this cocktail, it is a dominant flavor in the drink, along with lime and the scant amount of almond extract. The rums, in a way, almost take a backseat to the Pernod. This was unexpected but not altogether a bad thing -- in fact, this is one of the more unusual, interesting drinks I've made during this project. It doesn't shine though as a favorite, but I did enjoy this cocktail. One issue with it -- well, with the ice shell -- is that after about 3-5 minutes, the ice will start to melt and eventually the drink becomes a slushy, as the melted ice slides down into the drink itself. Not a deal breaker, but slightly annoying.

Bottom line, if you're having a couple people over, this is sure to impress (but only a couple - too much effort for a big gathering, at least for me). And it's a creative, interesting cocktail for sure. Definitely worth the try. Cheers!

Since this is apparently the "Palm Springs" version of this drink, I'll leave you with a Palm Springs tourism video from the 1950s. Until next time!