I was getting a little tired of the general direction of the previous nine cocktails, which, generally -- with some variation -- were a combination of a strong sour, a sweet, and rum. I was in the mood for something with a different kind of character - a strong coconut drink, or something with a banana base. Paging through Jeff Berry's tome, Potions of the Caribbean, a recipe towards the end caught my eye: the Crucian Banana Squash. It's also incredibly easy, with only three ingredients, and made with affordable, easy-to-find rum.

This drink (with, in my opinion, a somewhat unfortunate name) originated at the Sprat Hall Plantation, St. Croix, circa early 1960s. Apparently up until fairly recently this place was still operating and you could have stayed in the oldest guest house on the island, which was built in 1670!   Back in the 1960s, according to Berry, this place was really informal and the owners operated the bar as an "honor bar" where guests recorded their own drinks in a spiral notebook to be tallied up later. As Berry notes, "although it sounds like a banana daiquiri, its roots actually go all the way back to the 17th century Spanish Main: compare [this drink] to William Dampier's instructions for making the Miskito Indian drink Mishlaw. The recipe below first appeared in the 1962 book, International Cocktail Specialties. 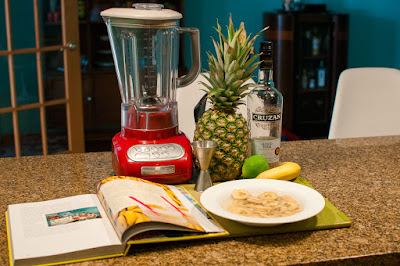 Step one:
Peel and slice bananas as thinly as you can, then place in a shallow bowl. Pour rum over banana slices. Cover bowl and let bananas soak in rum for four hours in your fridge.

Step two:
After the 4 hours have elapsed, pour contents of bowl into a blender. Add lime juice and crushed ice. Blend until smooth, around 30 seconds. Pour unstrained into Old Fashioned glasses. Serves 2.

Now, since I just recently received this wonderful tool to core pineapples, I decided to forgo the Old Fashioned glasses and instead use a whole pineapple as my vessel. 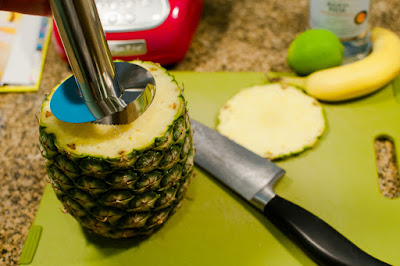 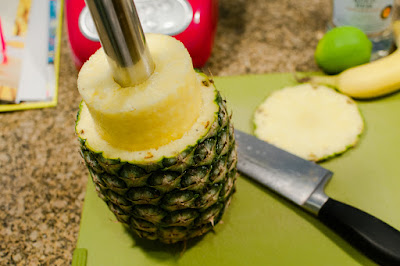 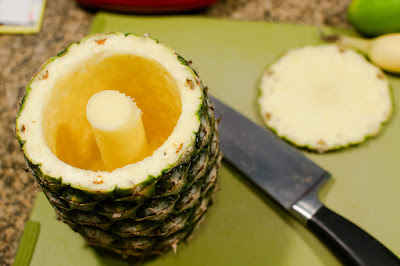 Berry says you should garnish with plantain chips, but I decided to be a little more ridiculous and go full banana dolphin: 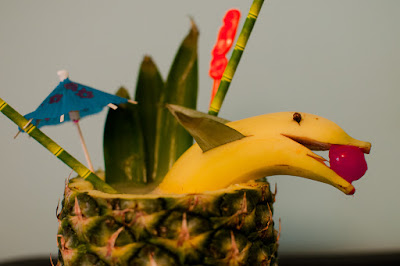 (To make a banana dolphin follow this wonderful tutorial from the folks at Chicago's Lost Lake tiki bar, or just slice open the tip, plop in a cherry, make three slices for fins and put in pineapple leaves, and use cloves for eyes. Cut roughly in half and stick a coffee stirrer or cocktail straw in the bottom half to anchor.) 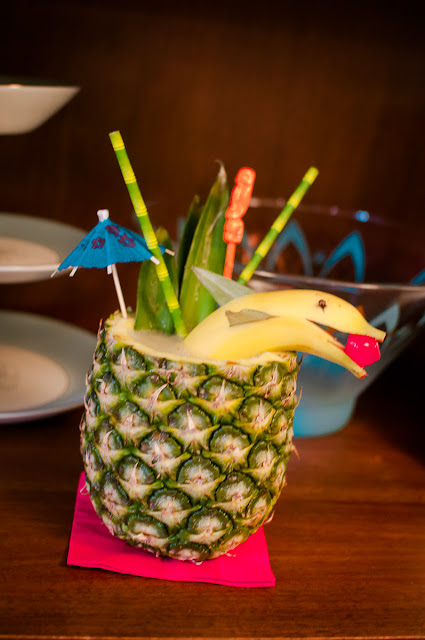 I also added an umbrella, some pineapple leaves, and a swizzle stick from the Tonga Hut. The resulting drink is a real winner in my opinion. Possibly my favorite drink so far in this little adventure. It's not too boozy - in fact, you barely taste alcohol. It basically tastes like a wonderful, freezing, banana smoothie, and the kick of the rum hits you after a few minutes to let you know it's there. The lime juice was too much for my better half, but I didn't find it overpowering in the least. 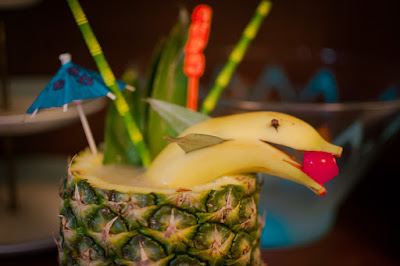 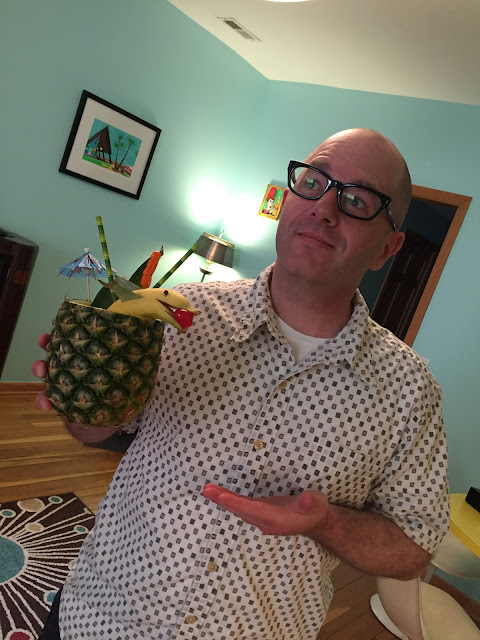 Serving this sucker in a pineapple with a banana dolphin makes it really fun and ridiculous - just as tiki should be.

Mix one of these up and share with your favorite person - you will both enjoy it!

While you're mixing, throw on a classic - Martin Denny's Forbidden Island! Cheers!