Falernum: To Buy or To Make?

Once you start getting into making tiki drinks, you'll undoubtedly notice that many recipes call for falernum. Falernum is a cordial made from infusing water with almonds, cloves, sugar, and spices. There are many recipes for falernum. You can also buy bottled falernum at your better liquor stores or online. I decided I would take a shot at making my own.

I largely stuck to this recipe from Imbibe Magazine. I made some modifications. First, I made about 1/3 of the amount that the recipe calls for, resulting in a small bottle, or about 1.25 cups of falernum. I  also omitted the star anise. There are a few steps to it, but it's pretty easy. From my limited research on making the stuff, I did see that several recipes called for lime juice. However, there were usually comments that followed saying something along the lines of, "No! You should never add lime juice -- just the zest -- to falernum. Fresh lime juice will make it spoil!" Not wanted my work to go bad within a couple of days, I omitted lime juice (the Imbibe recipe calls only for zest).

The resulting concoction was a fragrant, sweet batch of goodness that I look forward to using in the weeks to come. Got any tricks for making falernum? Let me know!

1. Buy some pre-blanched, pre-skinned, and pre-chopped almonds from a place like Whole Foods. Throw them in a glass jar (I used a pint-size mason jar) and cover with water. Shake occasionally. Let sit for 30 min, then strain and discard the water. Wash jar. 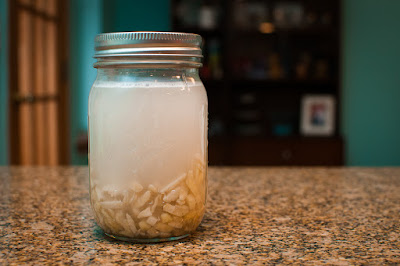 2. Give the wet almonds a rough chop, put them back in the jar, cover again with water, seal up, shake, and let sit for about 4 hours. Shake occasionally.

3. In a sauce pan on medium heat, add a Tbsp. of whole cloves, a Tbsp. of allspice and toss frequently for a minute. Then, add the contents of the jar to the sauce pan. 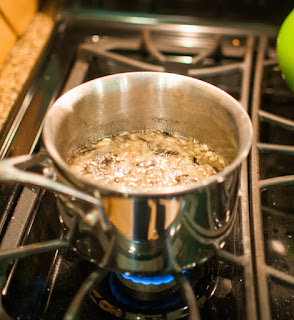 4. Add a quarter-cup of peeled, roughly cut fresh ginger and about 3/4 cup of sugar to the sauce pan. Stir continuously until it boils, then turn down the heat and let simmer for 15 min, stirring every so often.

5. Remove from heat and let cool. When it cools, add the zest of one lime and stir. Clean the glass jar, and then add the contents of the sauce pan back into the jar. Seal, and refrigerate overnight. 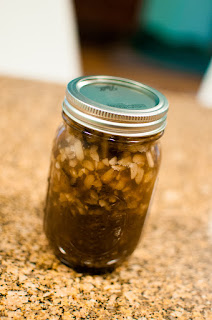 6. The next day, use a strainer and cheese cloth to strain the contents of the jar into a large measuring cup. This takes a few minutes. For every 5 ounces of resulting liquid, add 1 oz. of 151 rum. Stir. 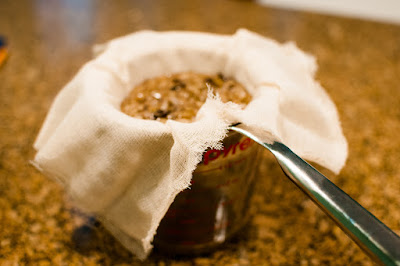 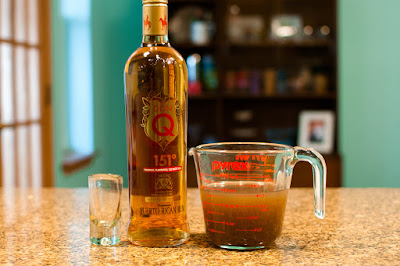 7. Once combined, use a funnel to pour into a swing top bottle and store in your fridge. 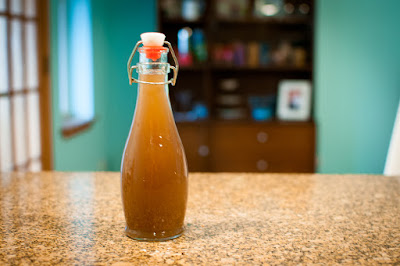 Email ThisBlogThis!Share to TwitterShare to FacebookShare to Pinterest
Labels: falernum